Every traveler and tourist know that festivals and celebrations represent a country’s cultural charms. Now imagine visiting Iran during ceremony days and participating in Iranian festivals and cultural riches up close and personal. Now that would undoubtedly be a peerless experience!

Iranians are multi-ethnic people who have different spiritual, cultural, and religious beliefs. As a result of this diversity, Iran hosts a variety of popular Persian festivals throughout the year in various cities of the country. Iran’s celebratory days have a variety of origins. These include Zoroastrianism culture’s ancient beliefs based on the Jalali Calendar or Islamic celebrations based on the Lunar Calendar.

These occasions and holidays can be divided into different categories, each of which is guaranteed to make a unique Iran tour for you! Keep reading to learn more about the 7 most fascinating Persian ceremonies and festivals below. 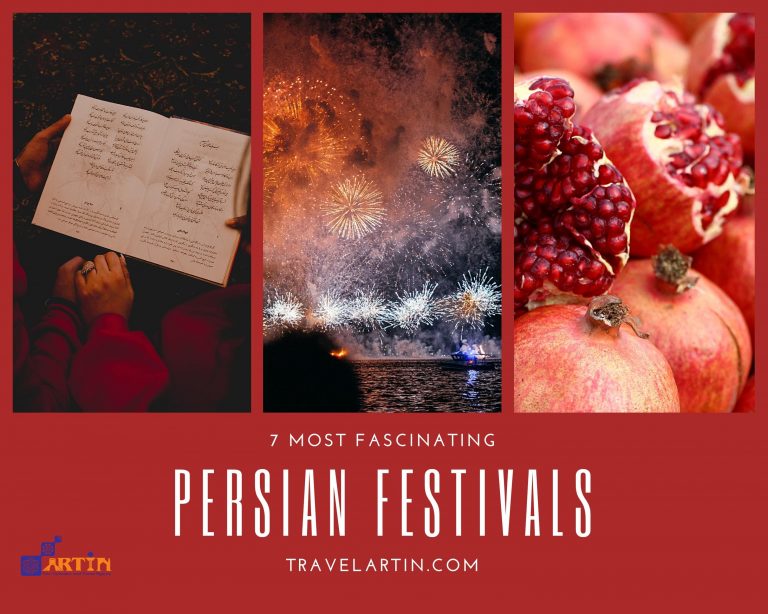 The sixteenth day of each month was known as Mehr in the ancient Iranian calendar. The Mehregan festival commemorates the Mehregan month’s Mehr day (the seventh month of the year). Mehregan is one of the oldest and most opulent Iranian festivals, reminiscent of the Mithraism faith. In ancient times, Perisan worshipped Mehr, Mithra, Mehr Izad, or the deity of light, friendship, and love.

In the Avestan calendars, “Mehregan” is the festival of light, friendship, compassion, and love. So, you could say that it’s also a Thanksgiving Day for Iranian farmers too. Since Mehregan was harvest day in the olden days, farmers gave some of their harvests to monarchs as an offering.

People visited their dear ones on this day, especially those who have been absent for a long time. They did this to appreciate the beauty of this vibrantly colored time around each other in the first place. The ritual starts with a prayer in front of a mirror.

After throwing a handful of noghl (sugar plum) over each other’s heads, they share hugs and kisses. As said before, this celebration used to be one of the most important Iranian festivals. Moreover, it has three important aspects: historical, spiritual, and natural or celestial.

Ancient Persians celebrated Mehregan astronomically a few days after the September Equinox when the crop harvest begins. On this day in history, Kaveh the Blacksmith, a legendary hero, fought Zahak and Fereydun became king. Mehregan represents the triumph of justice over tyranny and the triumph of good against evil. However, there’s more to Mehregan than just that!

In Persian mythology, Mithra or Mehr represents the Sun’s radiance, love, and camaraderie. Mehr is also the Keeper of Promises and warns those who break them. On the Mehr day of the Mehr month, Zoroastrians gather in fire shrines and prayer rooms to cook traditional dishes, pray, and rejoice. Finally, Jalal Al-Ahmad, a well-known Iranian writer, believes that Mashhad’s Ghlishuyi, or carpet-cleaning festival, is also connected to Mehregan. 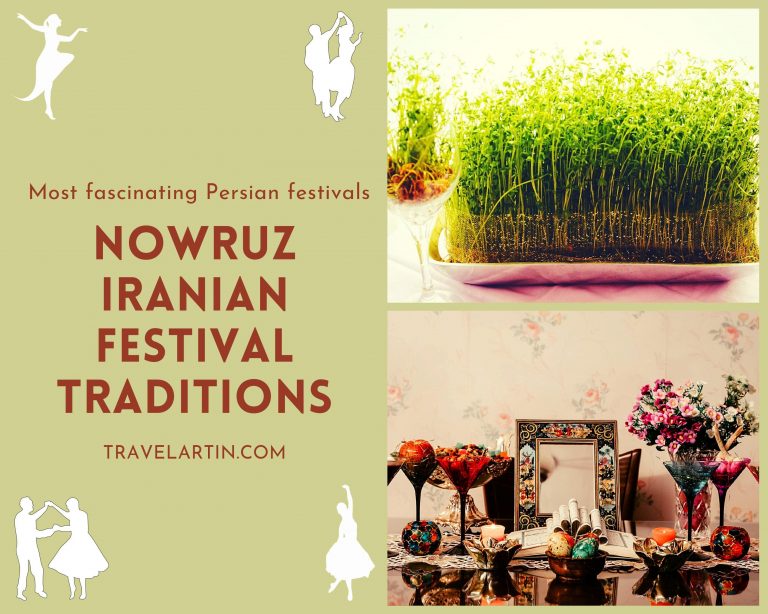 Nowruz, also known as the Persian New Year, is one of the most important Iranian festivals. Nowruz commemorates the start of the New Year for Iranians and some other ethnolinguistic communities around the world. Clearly, it’s a traditional event that dates back thousands of years, even before the rise of the Persian Empire in the 5th century BC.

The Persian New Year traditionally begins on the 21st of March, which is the first day of spring in the Iranian calendar. This Persian festival is just the end of the freezing days of winter when the fresh warm days of spring are celebrated for 13 days. Because Nowruz begins at the exact moment of the vernal equinox (first day of Spring), the New Year’s celebration time changes from year to year.

Though Nowruz is strongly rooted in Zoroastrianism, it transcends religious, cultural, and national boundaries. So Persians, and many people residing in Uzbekistan, Azerbaijan, Afghanistan, and Kyrgyzstan see Nowruz as one of the international Iranian festivals.

In 2010, UNESCO also added Nowruz to its list of humanity’s Intangible Cultural Heritage. As a result, the United Nations General Assembly declared March 21 to be the International Day of Nowruz. You may find it interesting to know that a character from Persian folklore appears on the streets at the start of Nowruz. Haji Firoz is his name, and he has a soot-covered face and wears a crimson cap and bright red clothing. 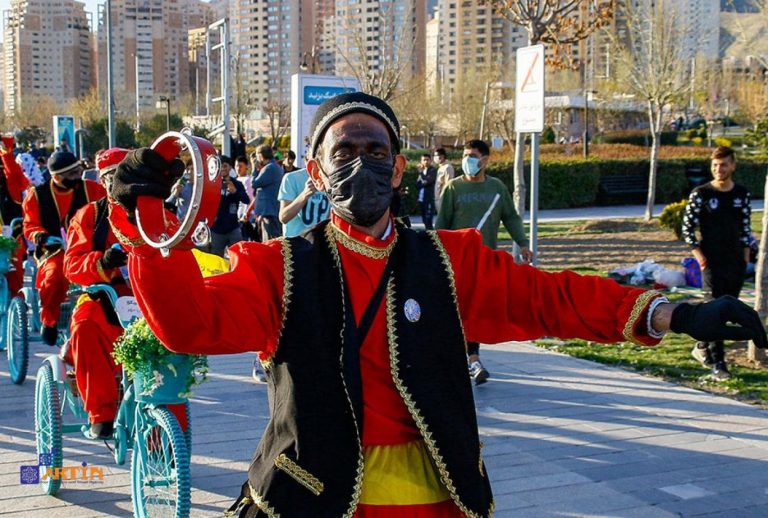 Iranians use haft-sin (seven S) symbolism in this celebration. Haft-sin is a tablecloth people design with seven symbolic elements, all of which begin with the letter sin (sound s). In addition, Iranian people display haft sin items on Nowruz in creative and beautiful ways. And Haft Sin includes: 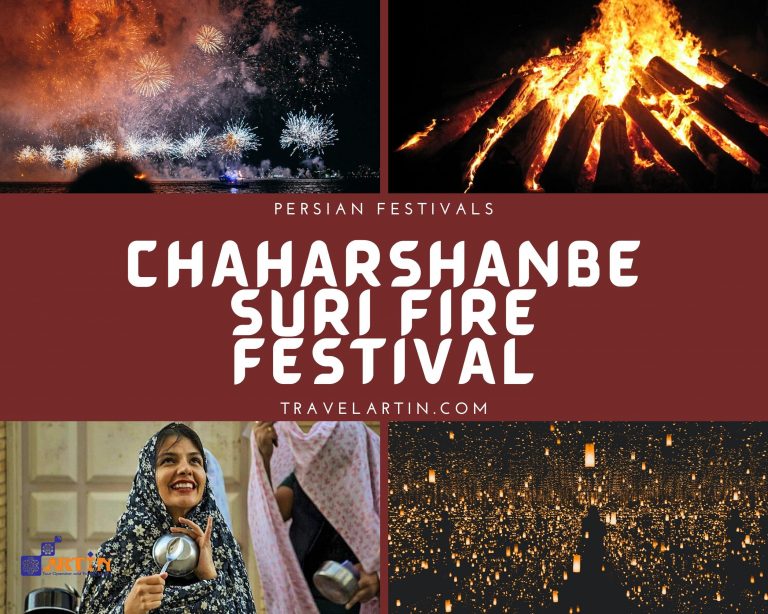 Perisan festival of fire (Chahar Shanbeh Soori) is an Iranian festival people hold on the eve of the year’s last Wednesday. During this Persian festival, young and old people lit bonfires in public areas to cheer others up and bring good luck to them for the next year. Then, people leap over the blazing embers, yelling:

Give me your gorgeous red color (Zardi-e man az to) And take back my sickly pale face! (Sorkhi-e to az man)

People build bonfires in the streets and jump over them during the Chahar Shanbeh Suri celebrations, which normally begin in the evening. Some people think that jumping over bonfires removes negative energy, sickness, and troubles. Moreover, it gives them joy, health, and strength while doing so. Although, for many Iranians, this Persian festival is more than just a cultural celebration.

Chaharshanbe Suri is one of the Iranian festival with origins that can be traced back to ancient customs. Once upon a time, ancient Persians performed the festival of Hamaspathmaedaya (Hamaspamadaya), which is now known as Farvardinegan. Simply put, Iranians celebrated fire festival to honor of the spirits of the dead over the last five days of the year.

On This day, Iranian families treated these spirits as honored visitors in their old houses. Then, they bid the spirits a formal goodbye ritual at the New Year’s dawn. The five-day festival took place in conjunction with festivals honoring the origins of fire and humans. Sound a lot like the Mexican holiday: the day of the dead, right?

The event divides into two separate pentads throughout the Sasanian period, known as the lesser and larger Pentads. Nowadays, we use the term “Panji” to replace “Pentad”. The notion gradually spread among people that the ‘Lesser Panji’ belongs to youngsters’ spirits and those who died without sin, while the ‘Greater Panji’ belongs to all spirits.

Fireworks from locally created firecrackers are now part of the celebration too. Sadly, Chaharshanbe Suri isn’t one of the spiritual Iranian festivals anymore. Instead, it has become an entirely secular event that hosts many of the best Iran tours. Children and adults who are looking for a good time dress up in shrouds, symbolically reenacting visits from the dead.

Then, to banish bad luck on the last Wednesday of the year, they race through the streets banging on pots and pans with spoons (Gashog-Zani, or spoon banging). They ask for treats by knocking on doors while disguised and covered. The customs are quite similar to Halloween, which is a Celtic variant of similar festivals that people once held all across the land. 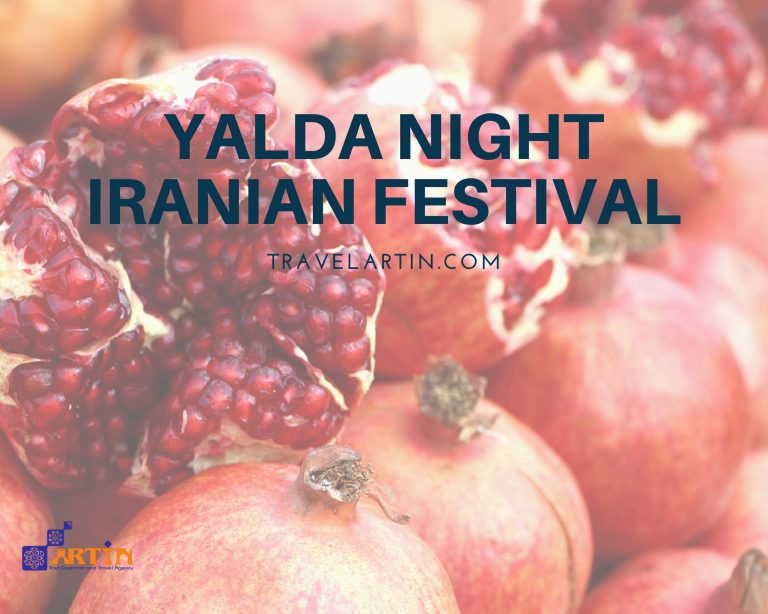 Shab-e-Yalda (Yalda Night) is an ancient Iranian festival that hosts numerous amazing Iran tours! that Persians celebrate on December 21 all over the world. Yalda is on the last night of autumn and the year’s longest night. Basically, Yalda means “birth” which refers to Mitra, the legendary goddess of light.

We all know that days get longer and the nights get shorter in the winter. Iranians consider the last night of autumn as a celebration of the sun’s rebirth and the triumph of light over darkness. Yalda has been practiced for centuries since the Persian Empire’s reign in Iran. Still, Yalda remains one of the most important and ancient Persian festivals in Iran.

People also celebrate Yalda in Tajikistan, Afghanistan, Azerbaijan, and Armenia. There are also certain rites resembling Yalda that people hold in Pakistan and Northern India around the same time of year. During Yalda, people meet in groups on Shab-e-Yalda. Usually, this happens at the homes of grandparents or other senior relatives. Iranian families celebrate the longest night of the year by eating nuts and berries, reciting Hafiz poetry, and making wishes.

Yalda night is one of the most symbolic Iranian festivals. Some of Yalda festival’s symbols include:

Summer Fuits: Persians believe that those who start the winter season by eating summer fruits like watermelon would not become sick during the cold season. Summer fruits like melons, pears, and apples were once stored in special cold storage called “anbar” to keep them from deteriorating. Nowadays though, merchants bring these fruits while they’re still fresh and juicy from warmer climates.

Pomegranate: Pomegranates are symbols of the cycle of nature, the glow of life, rebirth, and spiritual rejuvenation.

Divan-e Hafez: First, each family member makes a wish or a simple request. Then, they open the book at random and ask someone who’s good at reading Hafez to recite it aloud. After that, they interpret the relationship between their request and the poem. This way, they can determine whether their wish comes true or not. believe what the poem conveys, and then. This process is a part of the Persian festival of Yalda and is known as Faal-e Hafez (Hafez Omen). 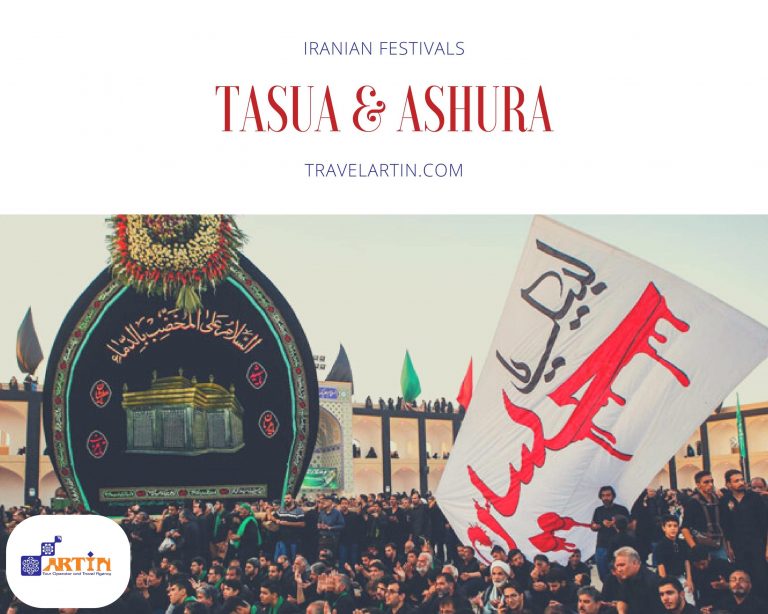 Many Iran tour operators highlight Muharram rites (Tasua and Ashura) as religious festivals worth visiting in Iran. By traveling to Iran during these events, international tourists get familiar with the religious and cultural characteristics of Iranian society.

During these Iranian festivals, people usually wear black and gather in the street to march. Some lead the crowd with enormous metal objects decorated with flags. At the same time, others beat their drums, slap their backs with chains, and follow the bereaved. Another tradition many families follow is preparing a meal known as “Nazri.”

Nazri is free food for everyone, rich and poor, and lucky tourists can help prepare the food, distribute it, and then get a taste of the exquisite Nazri food! The Imam Mosque in the Grand Bazaar in Tehran is one of the greatest spots to watch the spectacle and eat Nazri. However, this place is extremely crowded.

Nakhl-Gardani is one of Yazd’s most important cultural and religious traditions. The Nakhl (meaning palm tree) is a massive structure in the shape of a giant leaf or cypress tree that weighs many kilos. Hundreds of male mourners carry the Nakhl, which represents Imam Hossein and his martyr comrades, on their shoulders in Amir Chakhmaq Square.

The greatest Nakhl of Yazd province is in Taft, which is adjacent to Yazd. During the first decade of Muharram, Lorestan’s inhabitants hold festivities like performing sorrowful music with Chamari (a native musical instrument) too. 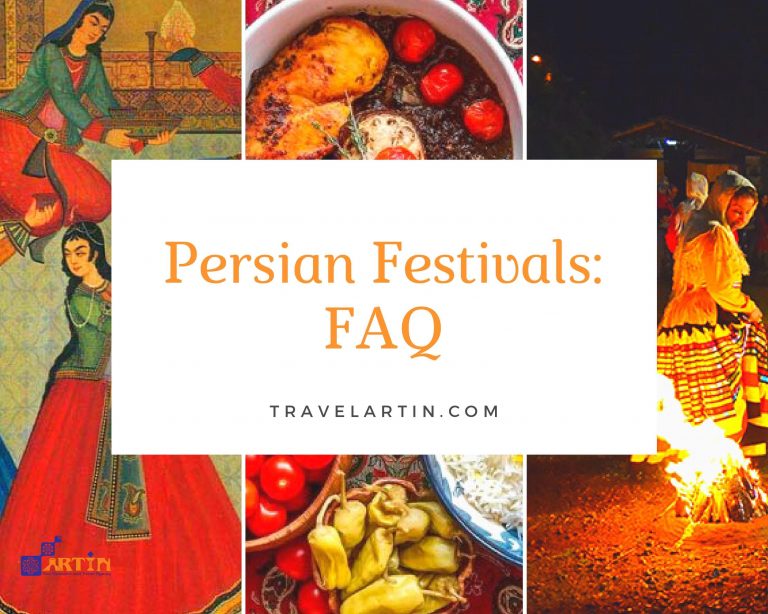 Is Christmas celebrated in Iran?

In general, the Iranian Christian community celebrates Christmas. Every year on December 1, Christians in Iran begin a fast. Until Christmas Day, no milk, meat, eggs, or cheese are consumed. On Christmas Day, they celebrate the birth of Jesus Christ by eating harissa, a classic chicken stew, or roast turkey.

What are some of the famous Iranian festivals?

Persian festivals are as great in number as they are in history, and some of the most famous of which is the Yalda night festival, Nowruz ceremony, Chaharshanbe Suri festival, Sizdah Bedar event, and Mehrgan festival.

What Persian festivals are more interesting?

Many tourists and travelers have pointed out that they found Chahar shanbe Suri, Mehrgan, Nowruz, and Yalda the most interesting among all Iranian festivals. The good news is, there are many tour packs you can book to visit Iran during these national ceremonies!

Is there a Persian thanksgiving festival?

Although there isn’t an Iranian festival named thanksgiving, the Mehregan festival is the closest thing to it in Persian culture. Mehregan is the festival of light, friendship, and love.