Iran is a beautiful yet underappreciated country with a rich history, the kindest people, and the most stunning architecture. Iran is a colorful fusion of cultures and traditions with many hidden areas. In this article, you’ll read about some of the world’s most ancient Iran undiscovered tourist attractions, and find the map to them.

There are natural, cultural, architectural, and recreational parts in this large country have yet to be explored. So, tourists seeking unknown and off-the-beaten-path tourist attractions will definitely love Iran. Let’s learn more about the Persian ancient history and its undiscovered places, all located in the heart of one of the world’s oldest civilizations. 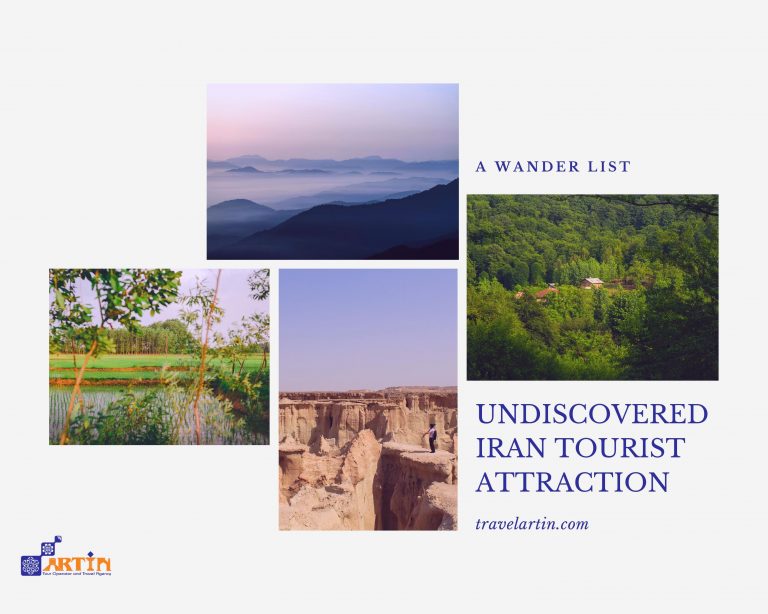 Chal Nakhjir is one of the Iran undiscovered tourist attractions with a lot of potential for adventure tours. In fact, this Cave’s beauty and sports appeal puts the more well-known caves of Ali Sadr and Katale Khor to shame! Only one kilometer of this limestone cave, estimated to be 70 million years old, is currently allowed for exploring. The sound of dripping water can be unsettling as you navigate the narrow channels, especially when you realize how far underground you are.

But, once you arrive at the “conference hall” at the end of the tunnels, an unexpected darkness greets you. Although dark, a mystery lies within the seemingly endless corridors that will stir up your curiosity. Looking at the underground canals will make you think of what lurks beyond those dark passageways.

The reflection of light from prisms of crystals and calcite stones, along with the numerous cave formations from the ceiling and spongy crystal covering of the walls and floors, form a unique picture in the cave. This scenery, along with Chal Nakhjir’s value as beautiful part of Iran’s nature put this cave among the world’s most exceptional caves among Iran undiscovered tourist attractions.

The cave’s unique features, such as tunnels, lakes, pools, and columns, have given it a unique charm. There is reported to be a pool of water at the cave’s conclusion, as well as vast hallways on either side. This cave is a unique and remarkable tourist destination that should not be missed.

Village on the Clouds: Filband – Mazandaran

Filband, a rural storybook village in Mazandaran Province, is entirely too beautiful to be among Iran undiscovered tourist attractions. And yet, it is! Filband is famous for its pristine environment and its floating-above-the-clouds atmosphere.  You’ll savor every moment in this pastoral idyll, where roosters and hens roam freely and carefree villagers do to their daily chores.

The town is engulfed in puffy white clouds at certain times of the year. A weekend here promises to ease your mind and whisk away your worries from big city life, with hilly meadows studded with grazing sheep and cottages peeking out from behind the woods.

The harsh winters in this area leave the village uninhabitable for about seven months. Interestingly, while the downhill weather is hot and humid in the summer, the high-altitudes of Filband have cool and pleasant weather. Due to its height, it offers spectacular views on sunny days too.

From this vantage point, you’ll be able to see forests, moors, and cottages.  Visitors of Filband village can see the peaks of the Alborz mountain range to the south of Filband. And, once they look towards the north, they can spot the Caspian Hyrcanian Mixed Forests and lush lowlands. Tourists can also relax in the village’s wooden huts while sipping hot tea and watching the clouds glide by.

Anzali Lagoon, like any other Wetland, is home to a diverse range of flora, including Water Lily, Lotus, and many other blooms. Anzali Wetland is also home to a variety of bird species, including:

As a result, Anzali attracts birdwatchers and nature enthusiasts at specified times for an excellent experience. You can also witness the wildlife Anzali puts on display with an Iran adventure tour. Anzali Lagoon is famous for its Lotus blooms, as already mentioned. So, if you have some spare time during the summer, you’ll have a great chance to see these lovely blossoms.

Tourists can stay in this cities’ hotels and villas and shop for handicrafts like wickerwork and pearl weaving in the local bazaars. Pickles, ‘Zeytoon Parvardeh’ (olives mixed with crushed walnuts and pomegranate paste), and local herbs are among the appetizers the region’s popular side dishes. Don’t forget to try these delicacies during your visit to Northern cities of Iran. Fish, like Caspian White Fish or Sturgeon with herbs, are popular local dishes since fishing is a main occupation in the locals there. 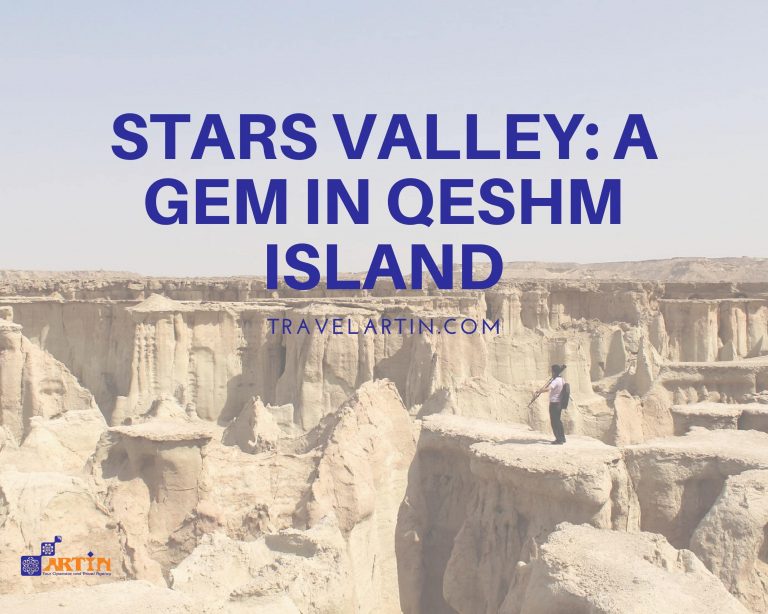 Apart from its magnificent natural beauty, Qeshm Island has legends that double the appeal of its tourist sites. One of Qeshm’s most beautiful places, which is also among Iran undiscovered tourist attractions is the Stars Valley. This valley, located five kilometers south of Qeshm , is one of the island’s Geo park attractions.

For eco-tourists and environment lovers, the Stars Valley is a fantastic site to visit. The splendor of Stars Valley is beyond description! Imagine being able to walk on the Moon; Stars Valley is the closest thing you’ll ever get. One may easily lose themselves in the labyrinth of this fascinating location for a few hours.

Many mysterious tales about this valley, which resembles a ruined building with corridors, gaps, and pits, are told so locals don’t wander around there once sky darkens. Needles to say, these tales have also discouraged strangers from visiting the valley in the dead of night, making it an undiscovered tourist attraction in Iran.

Our Iran east tour will take us to one of the most incredible places in the country. Iran’s picturesque islands in the Persian Gulf are one-of-a-kind destinations for visitors to Iran. We are staying in Laft horbor on Qesh island, which has wind catchers and minarets. Click to Learn more about Artin Travel’s Island Life Tour. 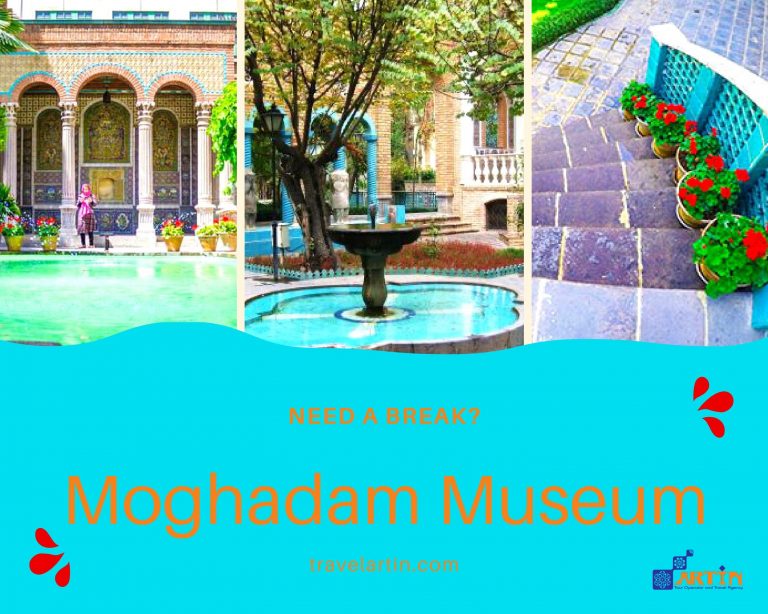 The peaceful Moghadam Museum is located in the middle of the bustle of southern Tehran. The stately home previously belonged to the artist son of Tehran’s mayor under the Qajar era. Right now, Moghadam museum houses his paintings and antiquities accumulated during his travels.

Moghadam house, like all old buildings and mansions in Iran, has a two-part building. The inner section or “andarooni” and the outer section or “birooni.” Colorful tiles, columns, and arches adorn the exterior of the house. Golden tiles and coral and valuable stones grace the mansion’s walls.

During the spring, the garden is full of the aroma of trees and flowers. In face, the Moghadam Museum, along with other places like Tehran Grand Bazaar, is one of the prettiest Iran undiscovered tourist attractions in the heart of Tehran. The magnificent hamam (bathhouse), seashell chamber, and zen garden, provide a momentary refuge from city life. In the museum’s pleasant café, you can prolong your sense of tranquility with a drink.

Moghadam Museum is a one-of-a-kind site that leaves you speechless. And, it compels you to spend hours admiring the interior design there. Spend some quiet time inside Moghadam to treat yourself to some warmth and beauty after visiting the modern streets of Tehran. And, note that Moghadam Museum is open from 9:00 a.m.  to 4:30 p.m. every day except Saturdays. Also, the museum’s yard is especially lovely in the springtime, when the trees and flowers are in full bloom. 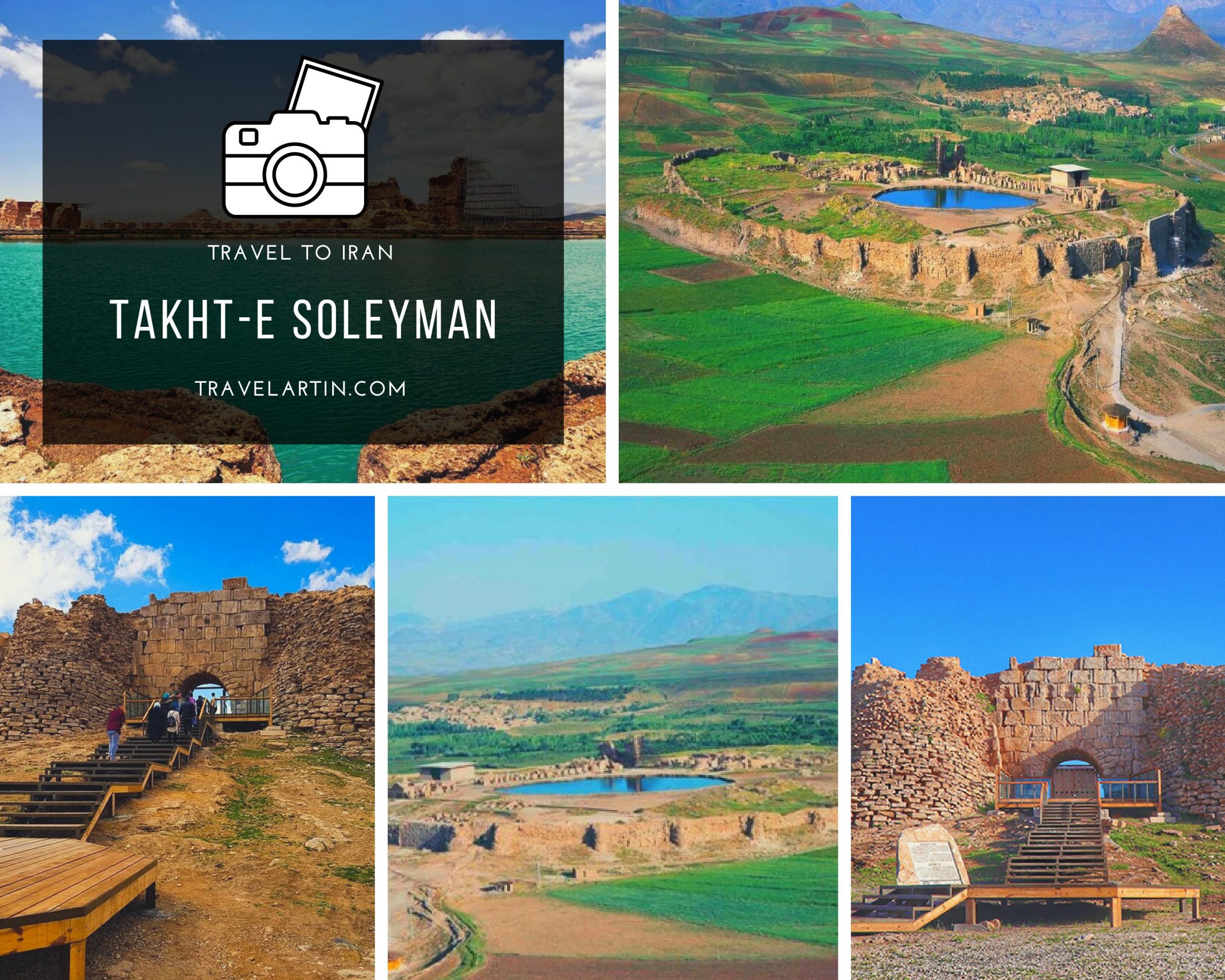 The “Takht-e-Soleyman” lake, which is as gorgeous and beautiful as it’s mysterious, is located in the West Azerbaijan region. This Persian lake is one of Iran’s most popular and unknown tourist attractions. According to folk folklore, this lake was formed when the prophet Solomon struck the soil with his stick. Legend also has it that an old treasure lies concealed within its depths.

The lake’s waters are brilliantly clean but dark as night due to its depth, and they are fed by a concealed spring deep beneath the surface. In legend, places like this were known as entrances to the underworld and abodes of earth deities.

The mythical treasure has drawn many courageous and adventurous people to the lake to examine it at various times, but none of them could succeed. However, that’s not all! There are numerous other local legends and myths around this lake too.

Folklore has it that Suleyman ordered his Djinns and demons to build a massive fire down beneath the lake, to warm the water and protect the queen from the cold. The devils, uninformed of Solomon’s death, have kept the fire burning for years, which is why Takht e Soleyman lake water has still remained warm. The bloodcurdling sounds coming from the surrounding mountains are also thought to belong to some of these sorrowful, lonely fallen angels.

Another tale about this Iran undiscovered tourist attraction is that after Cyrus the Great defeated the famous King Crusoe, the king of Lydia, he poured down all of his goods and valuables as a pledge in this lake. After that, the people of the area always sacrificed their bounty and precious goods as the lake’s retribution.

Underground cities are spread across the globe, from Asia to Africa, Europe to Oceania. While many of the underground cities of the world have become defunct, others remain fully alive. The Nushabad underground city is one of the world’s oldest, located in the core area of Aran-Bidgol county in the Persian city of Isfahan. This beautiful tourist destination is also not far from Maranjab Desert.

Nushabad’s underground civilizations were mysterious and amazing villages with hidden passageways, ancient tunnels, stone-made places, and activities few people have ever heard of. In the past, Noushabad was surrounded by mud-brick forts and castles to safeguard it against invaders.

However, these walls were not the only defensive measure used by the people of Noushabad. Residents of Noushabad devised the incredible idea of melting into the earth. They were able to do this because they had hollowed out a secret underground city where they could take refuge whenever an overpowering enemy invaded their land.

This hidden city, known locally as “Ouyi” or “hey!” in English, was discovered by accident in 2004. You may find it interesting to know that Nushband’s ventilation system is based on the differential between the internal and outside air pressures. This allows air to naturally move throughout this underground city. 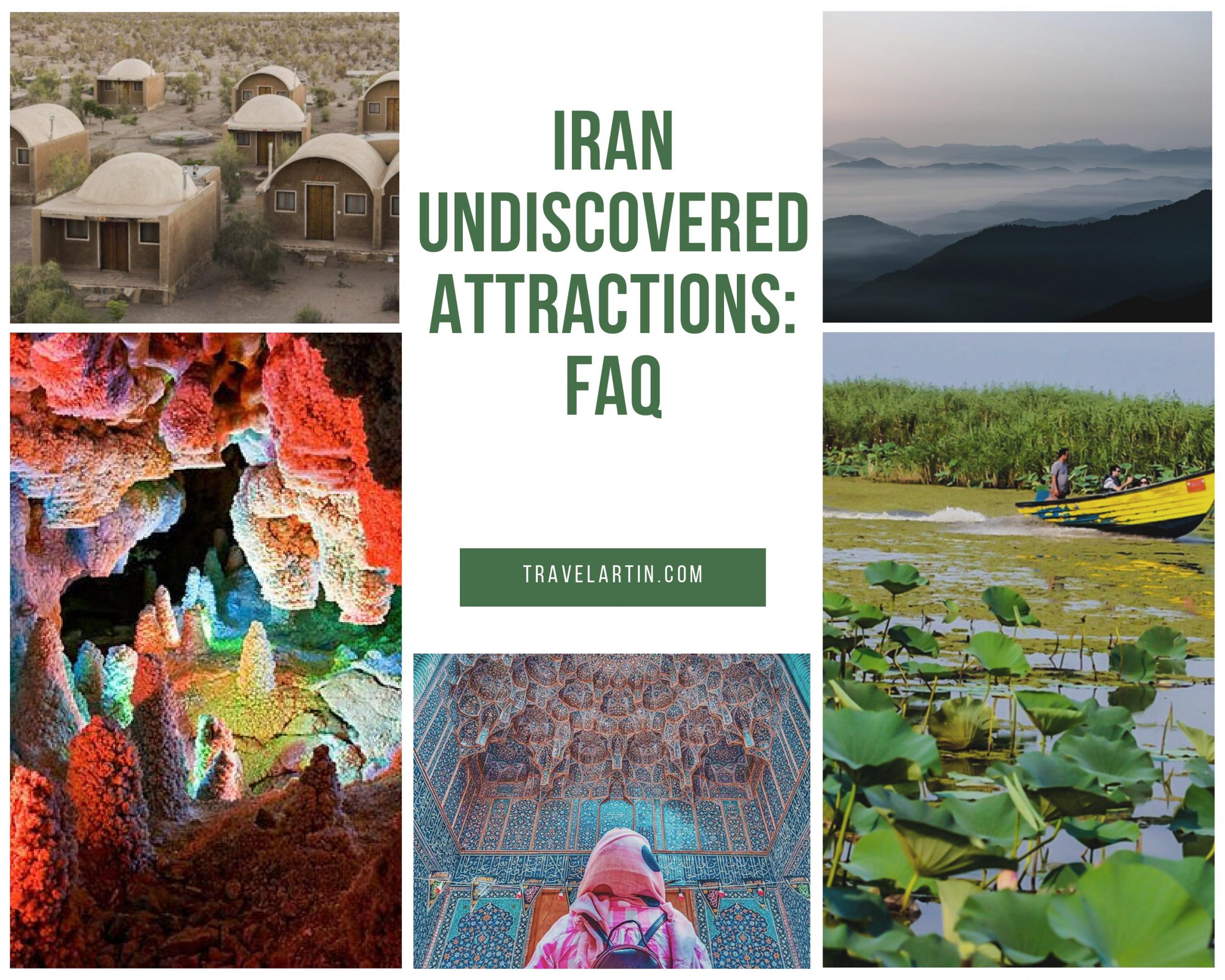 Where is Solomon's Throne today?

The Takht-e Soleyman (“Throne of Solomon”) archaeological ensemble is located in a desolate plain surrounded by mountains in northwest Iran’s West Azerbaijan region. You can visit this ancient site with one of our Iran tours.

What are some of the undiscovered places for tourists in Iran?

Chal Nakhjir cave, Nsuhabad underground city, Moghaddam house museum, Solomon’s Throne, and Filband are some of the most beautiful undiscovered tousit attractions in Iran. Read this blog to learn more.

Which tourist attractions should I visit in Iran?

We recommend you take the less crowded path and visit mysterious and uncharted tourist attractions in Iran. Read our many Iran tour packages to choose your favorite.

Is Iran worth visiting?

Yes. Iran is a relatively unknown tourist destination for many tourists, yet it’s so full of beautiful and undiscovered places to see. Natural, cultural, architectural, and adventurous: there are all types of attractions for everyone!